Probabilities of a white Christmas for select Northeast cities based on data from 1991-2020 (left) and 24 La Niña years (right).

We are experiencing our third consecutive La Niña winter. Could that affect our chances of a white Christmas? We looked at select Northeast cities and compared the probability of a white Christmas based on a thirty-year average with the 24 La Niña Decembers since the 1950s. Twenty-eight of these cities have a higher probability during La Niña years! The probability at Portland, ME increases from 37% to 75%! Though other increases are more modest.

Current conditions show a decent portion of the Northeast under a blanket of snow, thanks in part, to a recent winter storm.

Snow cover as of December 18th, these maps were produced by the NOAA, National Operational Hydrologic Remote Sensing Center.

The short-term outlooks from NOAA’s Climate Prediction Center favor below-normal temperatures for the eastern half of the county during the December 24-28 time frame. But a brief warm-up prior to that, combined with rain, could melt existing snow.

A strong storm system is expected to impact the region Thursday into Friday, bringing heavy rain and damaging winds before temperatures quickly turn freezing. Will this be another white La Niña Christmas? Keep watching the National Weather Service for local updates! 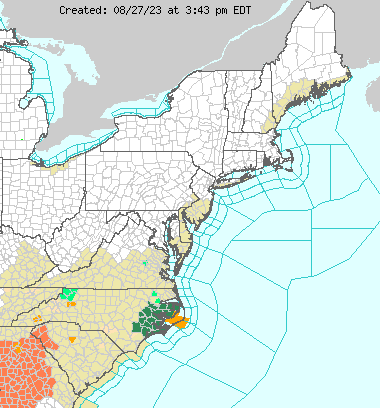